A major incentive for adopting cloud solutions such as Azure is to enable information technology (IT) departments to move server resources to the cloud. This can save organizations money, and simplify operations by removing the need to maintain expensive datacenters with uninterruptible power supplies, generators, multiple fail-safes, clustered database servers, and so on. This is particularly advantageous for small and medium-sized companies, which might not have the expertise to maintain their own robust infrastructure. 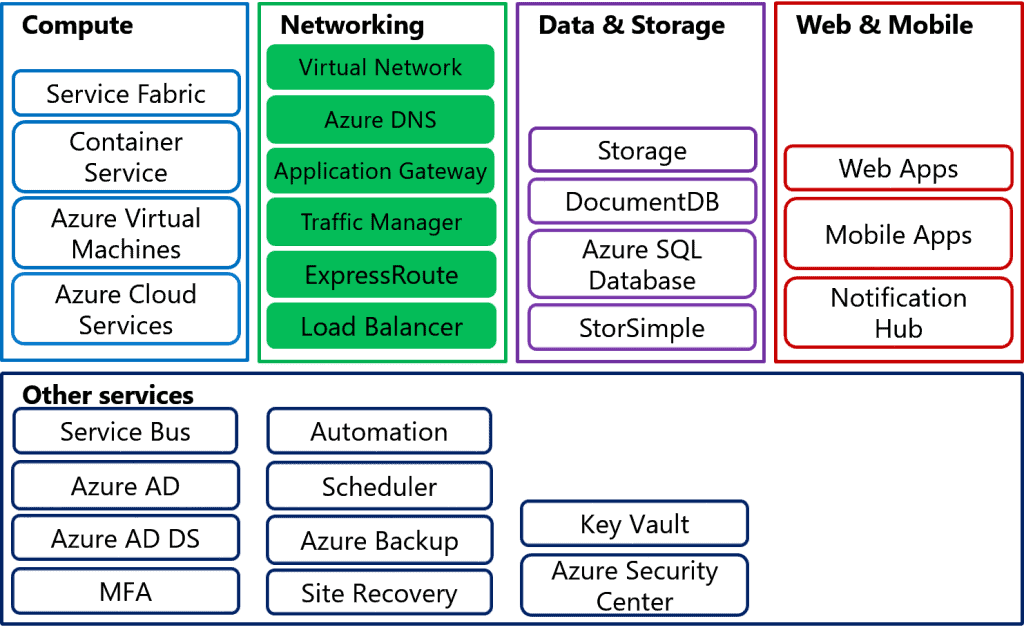 Once the resources are moved to Azure, they require the same networking functionality as an on-premises deployment, and in specific scenarios require some level of network isolation. Azure networking components offer a range of functionalities and services that can help organizations design and build cloud infrastructure services that meet their requirements.

Key terminology for Azure Networking is listed below. Each of these areas will be discussed in more detail throughout this course:

Virtual networks
Azure Virtual Network is a fundamental component that acts as an organization’s network in Azure. Organizations can use virtual networks to connect resources. Virtual networks in Microsoft Azure are network overlays that you can use to configure and control connectivity between Azure resources such as VMs and load balancers.

Subnets
You can further divide your network by using subnets for logical and security isolation of Azure resources. Each subnet contains a range of IP addresses that fall within the virtual network address space.

Network interface card
VMs communicate with other VMs and other resources on the network by using virtual network interface cards (NICs). Virtual NICs configure VMs with private and optional public IP address. VMs can have more than one NIC for different network configurations.

DNS
The Domain Name System (DNS) enables clients to resolve user-friendly fully qualified domain names (FQDNs), such as www.adatum.com, to IP addresses. Azure provides a DNS system to support many name resolution scenarios. However, in some cases, such as hybrid connection you might need to configure an external DNS system to provide name resolution for virtual machines on a virtual network.

Traffic Manager
Microsoft Azure Traffic Manager is another load-balancing solution that is included within Azure. You can use Traffic Manager to load balance between endpoints that are located in different Azure regions, at hosted providers, or in on-premises datacenters. These endpoints can include Azure VMs and Azure websites. You can configure this load-balancing service to support priority or to ensure that users connect to an endpoint that is close to their physical location for faster response.

Network security groups
You can use network security groups to provide network isolation for Azure resources by defining rules that can allow or deny specific traffic to individual VMs or subnets. This enables you to design your Azure virtual network to provide a network experience that is similar to an on-premises network. You can achieve the same functionality in your Azure virtual network as you would in the on-premises networks, such as perimeter networks (also known as DMZ or demilitarized zone).

Forced tunneling
With forced tunneling you can redirect internet bound traffic back to the company’s on-premises infrastructure. Forced tunneling is commonly used in scenario where organizations want to implement packet inspection or corporate audit.